The Goods and Services Tax constitutional amendment having been promulgated by the Govt of India, the rollout of the GST Bill will be a collective effort of the Central and State Governments, the tax payers and the IT platform provider i.e. GSTN, CBEC and State Tax Departments. Besides these main participants there are going to be other stakeholders e.g. Central and States tax authorities, RBI, the Banks, the tax professionals (tax return preparers, Chartered Accountants, Tax Advocates, STPs etc.), financial services providing companies like ERP companies and Tax Accounting Software Providers etc. 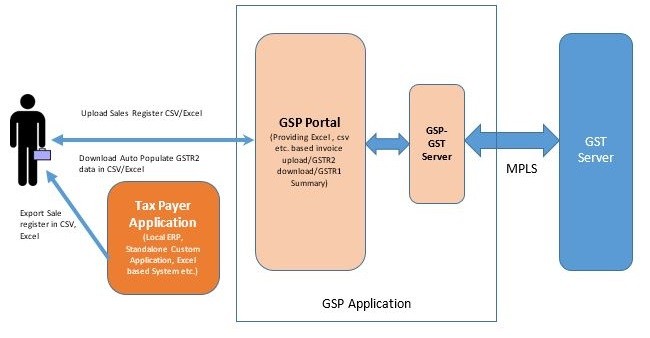 The GST System is going to have a G2B portal for taxpayers to access the GST Systems, however, that would not be the only way for interacting with the GST system as the taxpayer via his choice of third party applications, which will provide all user interfaces and convenience via desktop, mobile, other interfaces, will be able to interact with the GST system. The third party applications will connect with GST system via secure GST System APIs. All such applications are expected to be developed by third party service providers who have been given a generic name, GST Suvidha Provider or GSP. The GSPs are envisaged to provide innovative and convenient methods to taxpayers and other stakeholders in interacting with the GST Systems from registration of entity to uploading of invoice details to filing of returns. Thus there will be two sets of interactions, one between the App user and the GSP and the second between the GSP and the GST System. It is envisaged that App provider and GSP could be the same entity. Another version could where data in required format directly goes to GSP-GST Server. The diagram below gives the most generic case.

In the evolving environment of the new GST regime it is envisioned that the GST Suvidha Providers (GSP) concept is going to play a very important and strategic role. It is the endeavour of GSTN to build the GSP eco system, ensure its success by putting in place an open, transparent and participative framework for capable and motivated enterprises and entrepreneurs.

GST COMPLIANCE REQUIREMENT BY THE TAXPAYER

The taxpayer under GST Regime will have to provide following information at regular intervals: 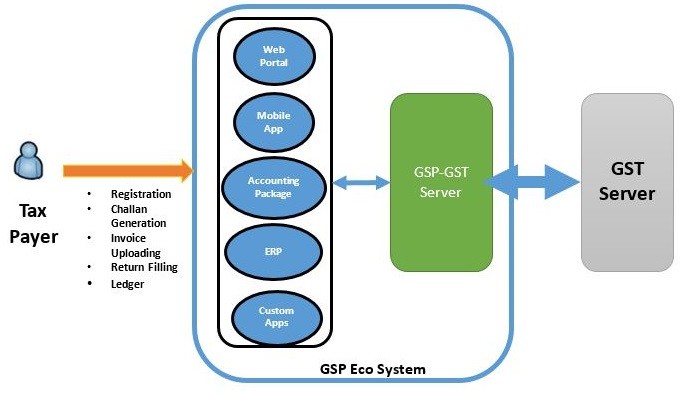 MyGST Center is brand name of GST Seva Kendra Franchise. Open your own GST Seva Kendra to earn monthly 50K-1L & become a tax professional. We also provide training and backend support to boost your business in your area by digital promotional content.